Highlight of the International Architecture Exhibition 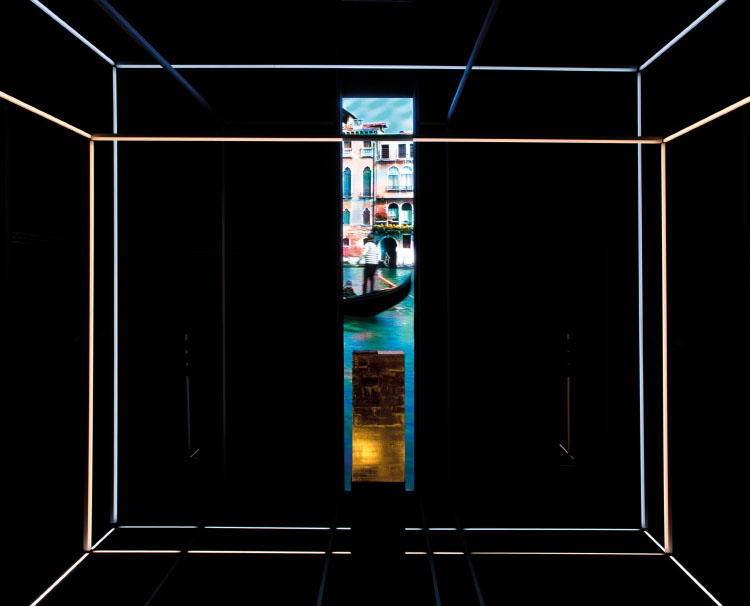 Pulsating LED lights in sync with sonorous heartbeat sounds – this is how an installation at the International Architecture Exhibition in Venice captivates hundreds of thousands of visitors. For this work, Nico Ueberholz was awarded the renowned Iconic Award.

Nico Ueberholz describes the opportunity to take part in the 15th round as the ultimate knightly accolade. International Architecture Exhibition in Venice – located in the most prominent setting, namely the Palazzo Michiel. This year, the historic building stages the special exhibition Venice Design, to which the Wuppertal-based designer was invited. Here, he remarkably stood out from the 17 international competitors with his Lichtzeitraum.

Space as a multidimensional experience

Anyone who comes close to his 3 x 5 m installation will be magically drawn by a low-frequency double heartbeat and the LED light that is connected to it. Some 200,000 visitors have entered the black cube since the opening of the International Architecture Exhibition on 28 May 2016 and found a space whose dimension seems to be constantly changing by means of circulating audiovisual effects. In a short chronological sequence, narrowness and expanse, height and depth alternate in one and the same room. The view through a virtual window onto the Canale Grande adapts to this production.

Outside the International Architecture Exhibition, Ueberholz’s portfolio includes temporary design, trade fair and exhibition architecture. In his previous works, he has also dealt intensively with the influence of light on the communicative process. As such, the installation at the International Architecture Exhibition is also based on the idea of making it possible to experience light as a creative force for architectural spaces in all their emotional diversity and temporal limitations.

At the same time, with Lichtzeitraum Ueberholz demonstrates in quite an intriguing way how and to what extent digitally networked spaces can be transformed at the push of a button. For this technical feat of masterly craftsmanship, he spent weeks working with his team and the smart home experts from the Connected Comfort brand association on the KNX-based system in which each LED luminaire was to be individually controllable. It therefore truly comes as no surprise that the installation is regarded as the most technically complex of the entire International Architecture Exhibition.

This work has now been honored with one of the most highly acclaimed awards in the industry. Ueberholz had already won the Iconic Award for Architecture in October. For only four years now, it has been awarded to groundbreaking buildings in which the individual aspects of architecture develop an almost “iconic” force. However, Ueberholz is particularly proud that his little Lichtzeitraum was on the winning list with 24 spectacular large-scale projects from all over the world, for example along with the longest glass bridge in China or the impressive Marina One complex in Singapore.

So the trip to Venice was definitely worth his while for the designer from Wuppertal. We can look forward to further enlightening creations.