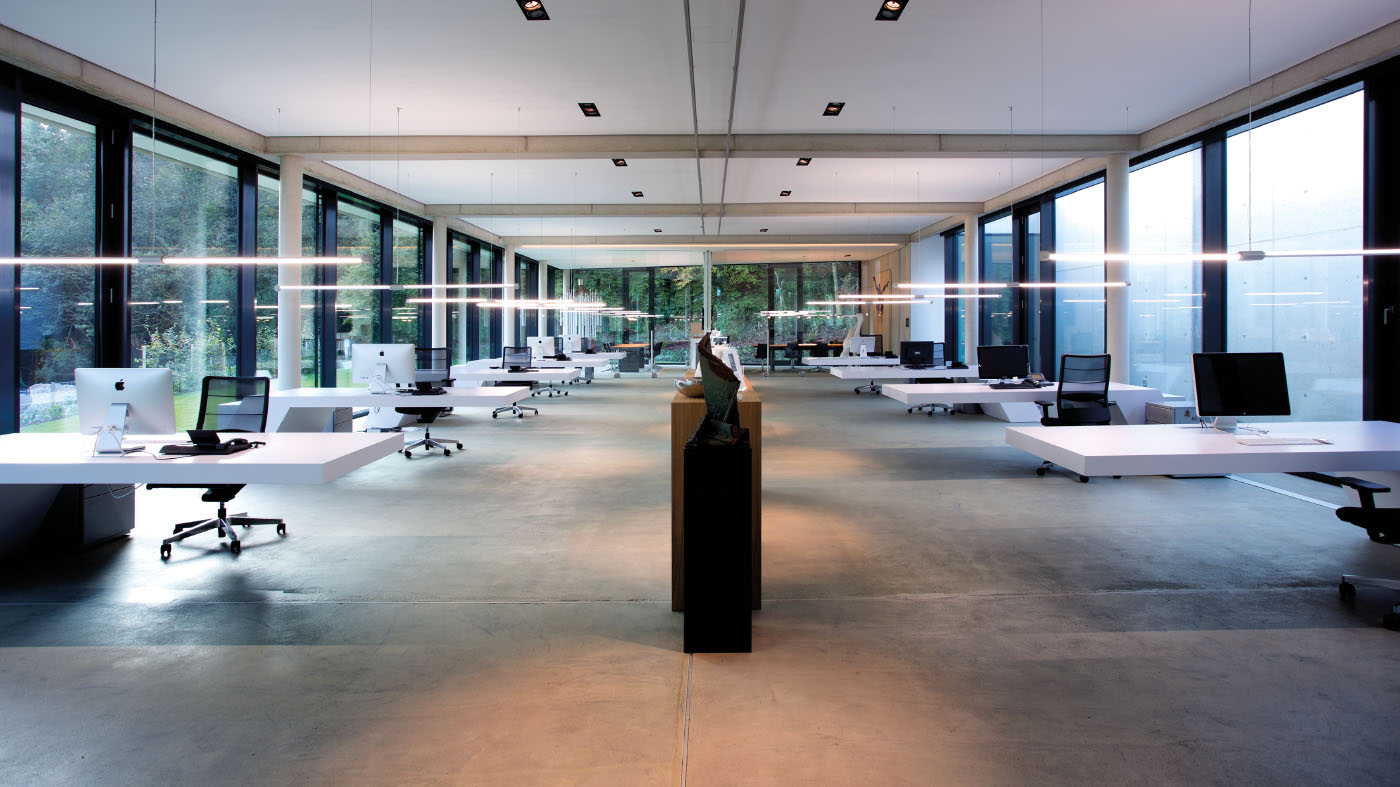 Our claim to quality, our creativity and our understanding of architecture. The new company domicile is office and showroom in on

Following a construction period of just five months, our new office building in Wuppertal was completed in January 2014. The single-story 780 sqm concrete cube is located on a 2,800 sqm site.

The concrete cube appears to float through a 20 cm high base illuminated by LED lamps.

At first glance, the concrete cube has neither windows nor doors. Access can only be presumed through the pathways and two aluminum panes protruding 2 meters from the cube. Precisely between these panes is the 3.70 m high, 1.60 m wide and 380 kg heavy entrance door made of solid oak wood. This door leads directly to our light-flooded open-plan office. Our workplaces are generously laid out. Due to the full glazing on two sides of the room, which is optically held by a concrete clamp, each of our employees has a daylight workstation. An intentional strong contrast between outside and inside.

The white, spacious desks made of solid plastic, for example, are also unique specimens of genuine Ueberholz.

The 10 cm thick table tops seem to virtually float freely in the room due to their 3 m long, unsupported cantilevers. The Glide LED pendant luminaire from Ueberholz new lighting line also gives a weightless impression with its barely perceptible suspension. By turning the LED tube, individual lighting moods can be created at each individual desk. The pendant luminaire is also extremely energy-efficient and has already won several design awards.

The two large conference rooms are acoustically but not visually shielded by room-high sliding glass walls. Despite the open design, they offer important retreat possibilities for in-depth discussions.

"Designing new spaces offers a unique opportunity to implement our own design aspirations down to the very smallest detail without making compromises. Today, the building is the architectural calling card of Ueberholz, reflecting the design philosophy of the office and providing the team with the necessary spatial anchor for their creative work", says
Nico Ueberholz about his concept idea of designing his own office and realizing it in detail with his own company.

Kitchenette, sanitary rooms, heating, technical equipment and storage require less light and are therefore located in the northern part of the building with a partially closed facade. The interruptions in the facade surface caused by narrow, building high window slits also supply these rooms with daylight.

The kitchen design also shows how extraordinary atmospheres can be created with materials and light: The Plexiglas fronts of the wall units are printed on the reverse with motifs of the eternal ice of Antarctica. In combination with blue indirect lighting and the materials aluminum and exposed concrete, the kitchen becomes an atmospheric world of experience that triggers emotions in the observer and conveys values such as durability.

The outdoor area is illuminated by the award-winning Jack LED street light, also an in-house creation. 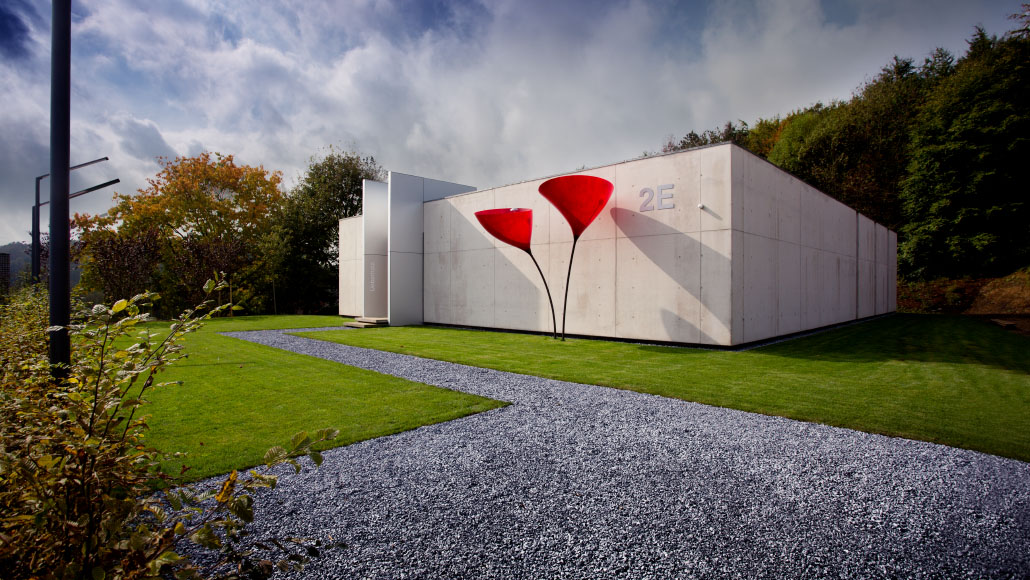 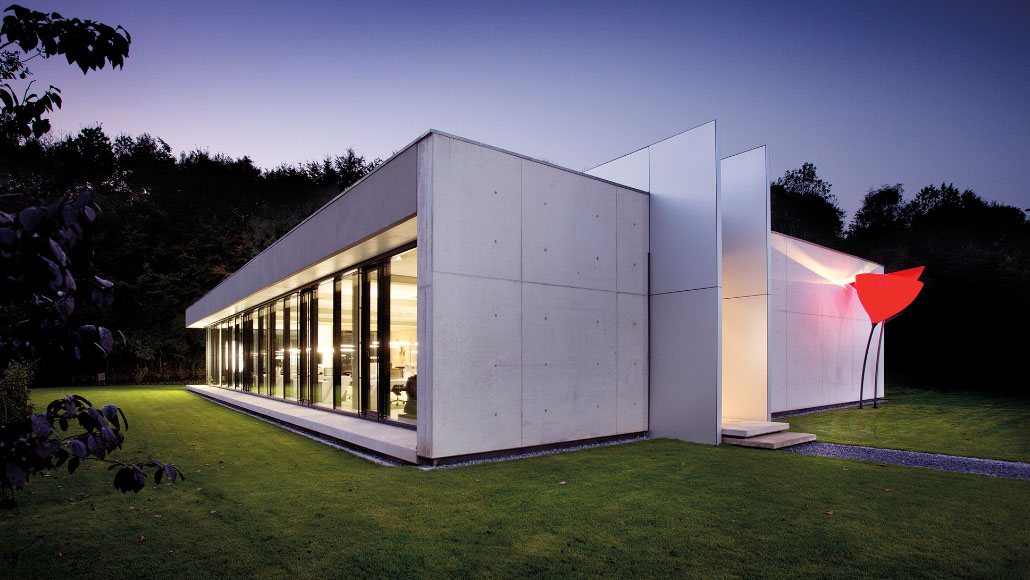 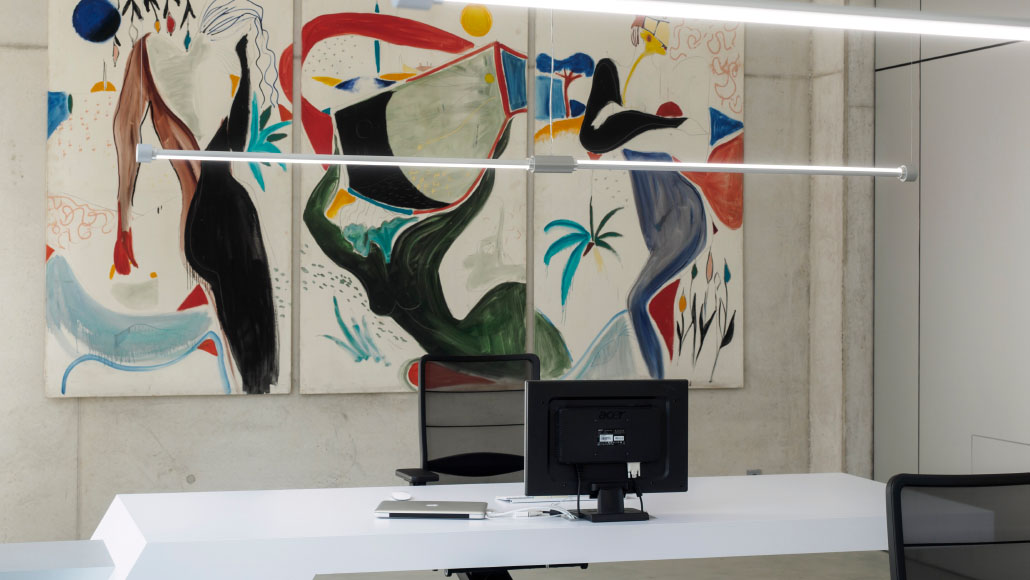 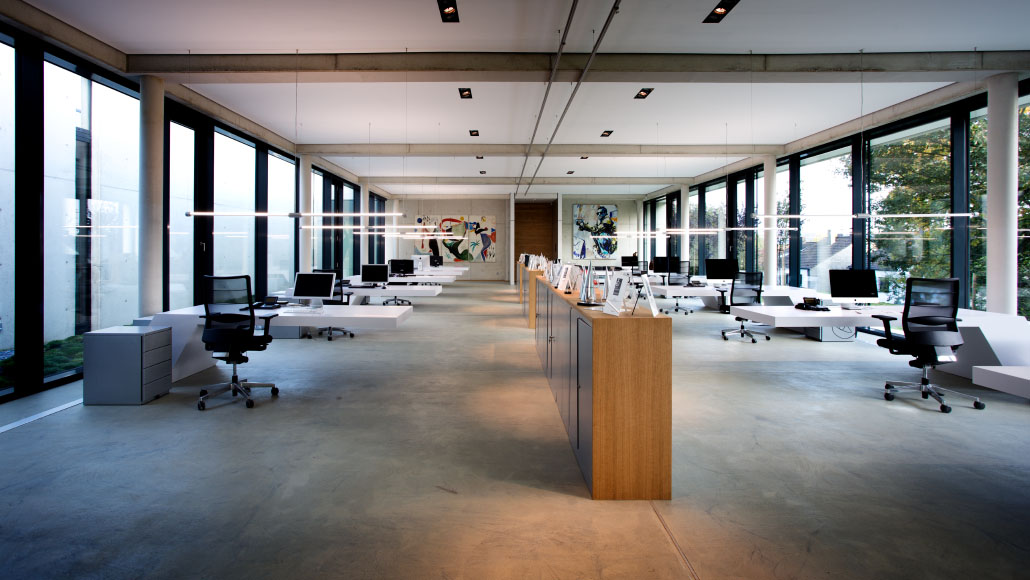 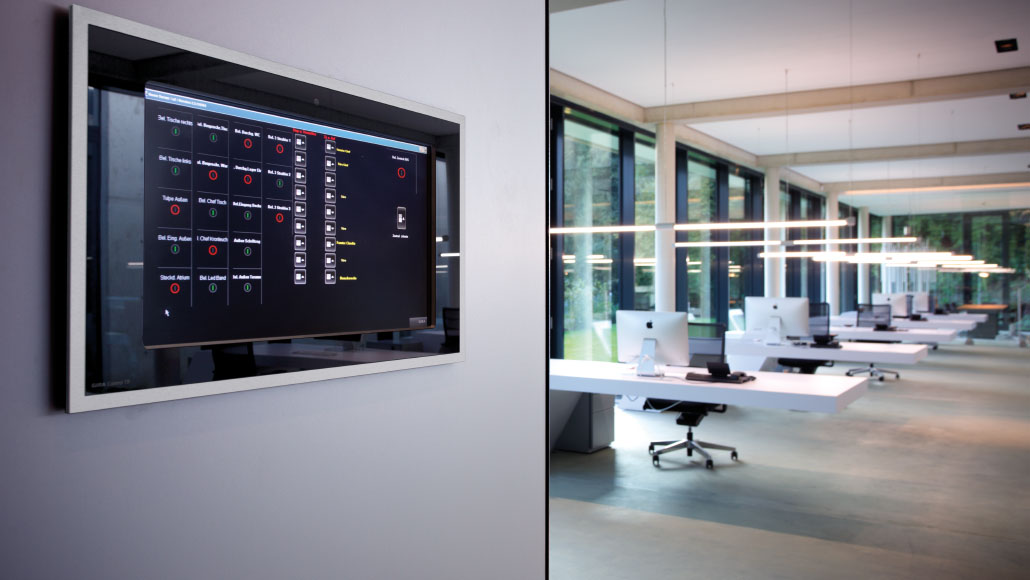 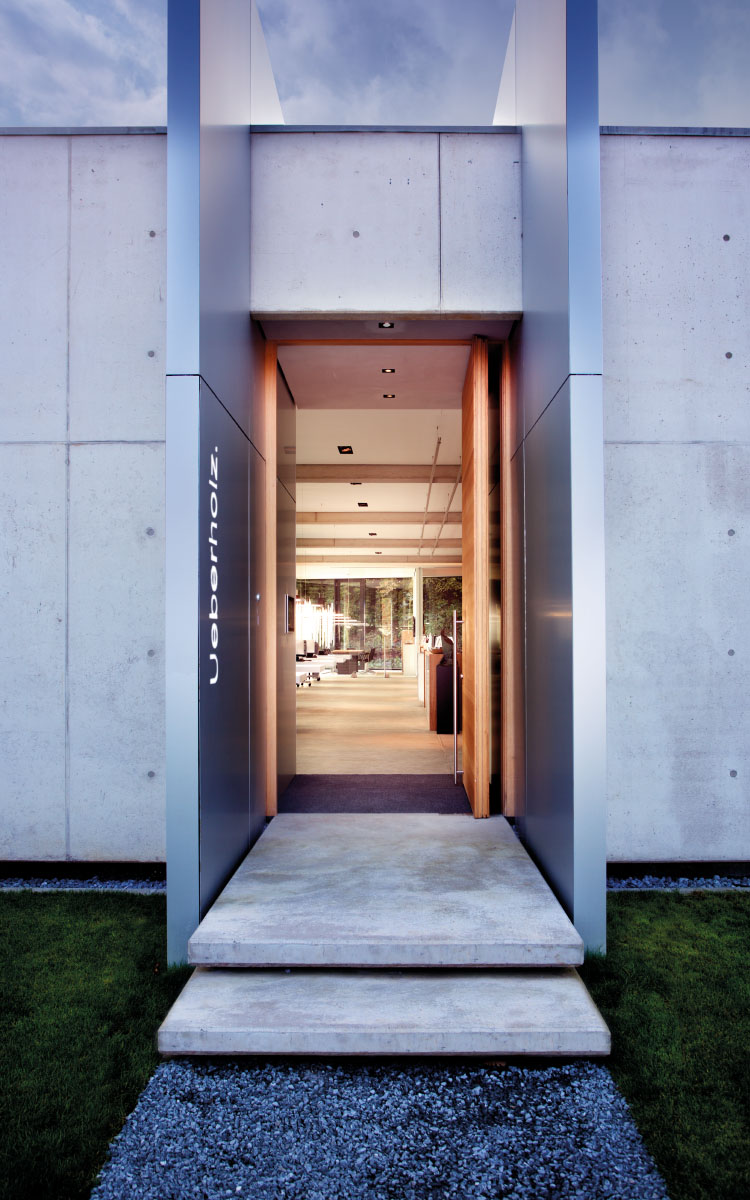 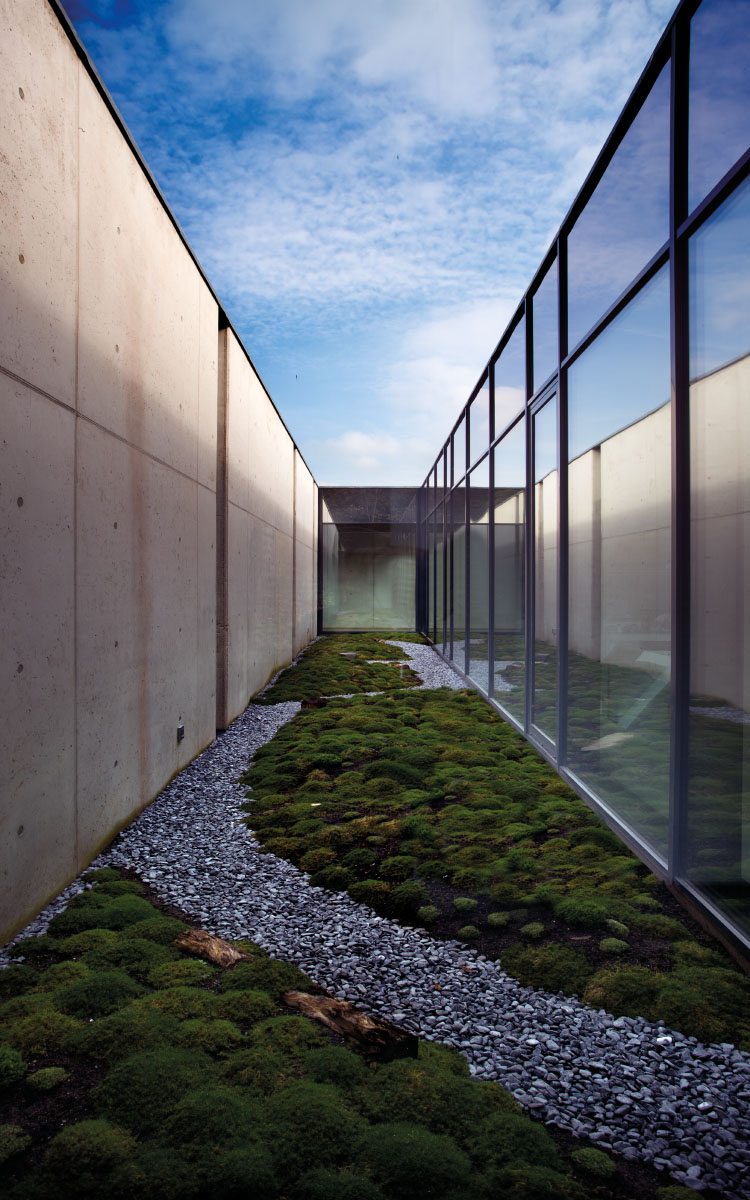